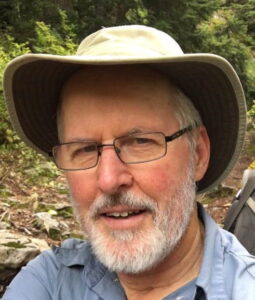 On September 1, 2022 The Rev. Bill Fulton accepted our call to be the Vicar of St. Germain’s Church!

The Rev. Bill Fulton recently retired as the Vicar of St. Antony’s, Silverdale, where he served for thirteen years. Prior to that, he served concurrently for nine years as the Vicar of St. Andrew’s Episcopal Church in Florence, Oregon, and the Executive Director of Florence Habitat for Humanity. He began ordained ministry serving two small churches in Kansas after graduating from The School of Theology at the University of the South in 1995.

Bill is married to Katy, a professor of anthropology at South Puget Sound Community College. They met and were married in Petersburg, Alaska, where Katy was a journalist and Bill was a Forest Service worker and a shipwright before going to seminary. They have two adult sons, a daughter-in-law, and a grand-dog. Bill enjoys watercolor painting, backpacking and bicycling. Bill looks forward to serving the people of St. Germain’s and discerning the future of ministry with them.

Join us for our Sunday worship at 10:30 every Sunday morning.

We are a community that is rooted in our common prayer and our celebration of Holy Communion, which forms us and prepares us to step beyond our church walls and serve our neighborhoods, our towns and cities, and the world.

OUR MISSION:
So that ALL may know and serve God, our mission is to let the love of Christ shine brightly in our daily lives by being a welcoming, nurturing and supportive community that is grounded in God’s Word and Sacraments.

Find us on the map: